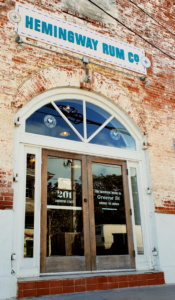 Back in February, RumCask made our way down to Key West in Florida to visit the Hemingway Rum Company. They are mainly known for their release of Papa’s Pilar however, this distillery is their innovation centre, headed up by Shawn Martin. The main innovation team is also comprised of Legendary Rum Author, speaker and judge ‘Bahama’ Bob Leonard and Mark Christopher Straiton who has a degree in Fermentation Science. Between them, the team has a wealth of different attributes from yeast engineering, to spirits distillation experience, craft cocktail creation and lots more.

Their innovation centre comprises of a fermentation tank, small pot still with a reflux column (topped with a dephlegmator) and some aging racks. The pot still is a Hamilton Pot Kettle made in 1977 in Cincinnati Ohio and has a capacity of 300 gallons. A very intimate setup where the three members of the distilling team not only oversee all parts, but also handle all parts, of the process.

They have a procedure of fermenting molasses, sourced from the US, to create a wash which they distil twice. The first to create their low wines, which is then distilled to create the head, hearts and tails of their low wine. The hearts are where the rum is created from. The hearts have water added to them to bring them down in ABV very slightly and then put into barrels to age. 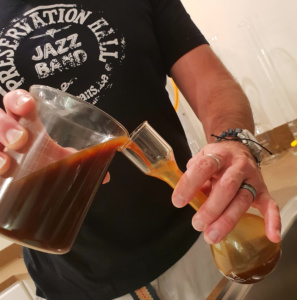 The team currently run a fermentation time of around 4 days in which they create a more yeast friendly environment and try to remove most of the bacteria from the molasses. This is to prevent any natural reactions occurring within the molasses that could be unwanted.  This process currently uses a commercial yeast which convert sugars in the molasses to alcohol. After the 4 days, the bulk of this conversion has been completed and the wash in the fermentation tanks is now ready to be distilled.

Their pot still uses a batch 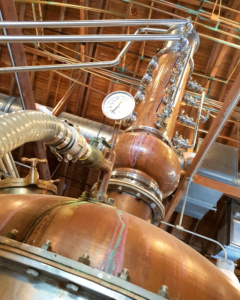 process which, as the name suggests, creates one batch of distillate at a time. The still must then be cleaned to be reused. This is a labour intensive process but usually produces a product which is ‘heavy’ in flavour compared to a continuous column still which commonly produces a more ‘light’ flavour profile.

Once the ferment is ready, it is placed into the pot still and the first stage of the distillation begins. This ‘stripping run’ is quite simple as it is quite ‘hot and fast.’ This is done to separate all of the alcohol from the ferment. The procedure is completed when the wines coming off drops to around 5% ABV. Once finished, the pot still is washed clean (after leaving time for cooling!). 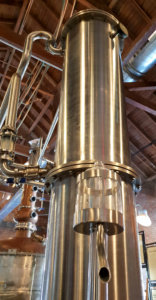 After this initial separation, the low wines are then re-distilled. This is really when we start to get close to what will eventually become our rum. Although a similar process as before, this part requires more expertise. The first thing we noticed was the smell in the air. After a short period of the pot still warming up, there was a smell of fresh berries in the air. A lovely scent and we were told that it is an indicator that the distillate was about to appear. Sure enough minutes later, the flow began.

This first part is the heads of the rum. This is the dangerous and the kill/make you go blind part of the separation. We were warned not to taste this part and the smell is quite pungent of formaldehyde, acetone and nail varnish, not very appealing at all. As this runs for a while the smell softens and different, more palatable notes appear. As the heads are drawn we start to reach a phase when the cut needs to be made into taking the hearts. This is the good stuff from the process that will be used to make the rum. 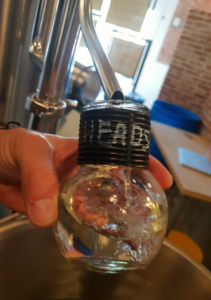 Before this cut can be taken, the team taste the rum at regular intervals until they each believe the heads are gone. They take samples and go back and forth as a team to come to a decision as to when the heads are gone. A very cool procedure to be involved in and sample alongside the team. Once a decision is made, they will then take a cut and start to collect the hearts of the distillate. As the hearts run, the notes slowly change and morph into more pleasing ones. The mouthfeel changes as well. These hearts run until the team start to detect notes which they feel could be in the tails. These are usually fusel oils. At this stage they will take another cut and take the tails of the distillate. 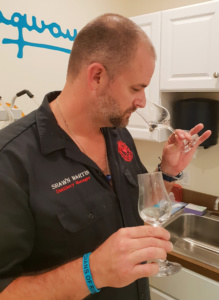 The entire process is hand, nose,taste, sense driven. Every one of the five sense comes into play and is needed throughout the process. The changes in smell as the pot still warmed up, the hands on approach to valve adjustments, the tasting process of when to cut the heads during the distilling process, the sight of the green tinge slowly getting lighter as the heads are separated from the low wines, the sounds of the vapour as it intensifies and then falls away and many more examples. If this isn’t hand crafted, artisanal work, we don’t know what is.

While with them, we ran through an entire process from start to finish from the molasses being poured into the fermentation tank, right through cutting the hearts from the distillation of the wines. The result? A 100% pot still product of 83% ABV. Although at that ABV it was very strong, we found notes of honey suckle and white pepper with a lovely mouthfeel to the rum. We were very surprised that a distillate at that high an ABV could impart that much flavour from this relatively new innovation centre and we needed to go further down this rabbit hole.

In what felt like 20 minutes but in reality was almost 4 hours, we adjusted the level of the distillate to a variety of different levels adding RO (Reverse Osmosis) water. We all settled at 61.5% ABV. Here the flavours were at their peak, the mouthfeel still present, yet the levels of the ethanol weren’t overpowering. What a feeling, what a rush! We left some to try again the next day, but came to the same conclusion; this ABV is where we felt this product was at its peak.

We were left pleased but also frustrated that we couldn’t taste this product aged. Aging takes time, something we didn’t have enough of. Was there a way around it? 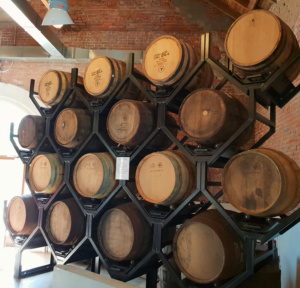 Shawn Martin was way ahead of us in terms of barrels. He had a similar distillate that had been aging for around a year in different barrel types and had already started his experimentation in this part procedure. Port and sherry barrels as well as ex bourbon barrels of different stages of use were all in use. Talks of innovation through stave aging, wood chips etc were all mentioned. Having tried a multitude of different barrels we found the first use of a dry port barrel was our favourite. Those notes of honey suckle and pepper from the initial distillate were now complimented by notes of tobacco and dried fruit on the nose. They translated to the palette and gave a dry sweetness and a delicious flavour profile which was really incredible for something aged as little as it had. This barrel really imparted a lot of flavour and helped accentuate the notes already present. This was partly from the port but also from the wood as well which not only gave new aromas but also helped to enhance others which were well hidden earlier. 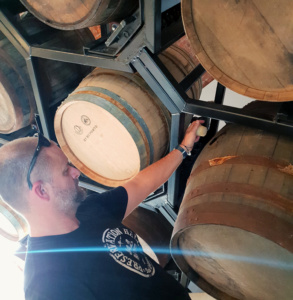 Why is this the innovation centre? It’s simple really. The main brand of Papa’s Pilar that is made by Hemingway Rum Company contains blends from other distilleries and no rum from Key West for their national releases. The only expressions which contain any of the rum created in Key West, is sold at the distillery itself. The long term project of Hemingway Rum Company would be to create a product that is purely from their distillery which everybody could be proud of. This would obviously take time and experimentation.

One of the main innovations for the near future is the change from using a commercial yeast to a natural local yeast from Key West. This yeast would be one that they would harvest and cultivate themselves. Alongside the yeast, there are talks of different fermentation lengths, different distillate cuts, alternative blends of cuts; the list is almost endless. After speaking to the team, we all agreed there are many ways Hemingway Rum Company can be exploratory and in many different aspects of the creation process which can produce hundreds of outcomes for them to consider. 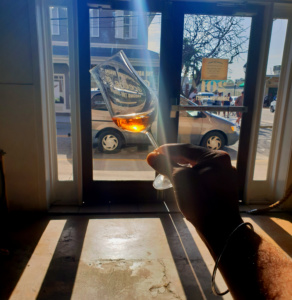 We were very impressed with the setup at Hemingway Rum Company. They are trying to create something special and specific to Key West in Florida. This will take time not only due to experimentation in the variety of procedures mentioned but also time aging in barrels to try to help unlock the full potential of certain releases. We can say without a doubt we are very excited for the future releases. Stay tuned for updates from them and we are sure there will be some releases coming which people in and out of the rum world will really enjoy. 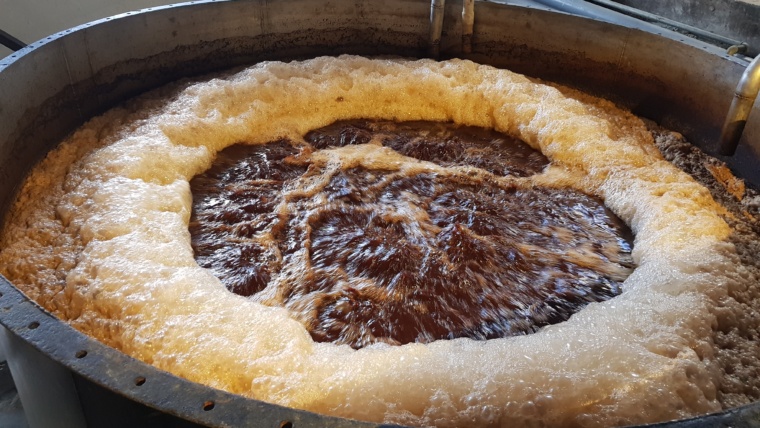 Fermentation – How Is Rum Produced? Part 2